"Along the roads laurel, viburnum, and alder, great ferns and wild flowers delighted the traveler’s eyes … Then a strange blight crept over the area and everything began to change. Some evil spell had settled in the community ... everywhere was a shadow of death"
(Silent Spring, Rachel Carson, 1962)

In the last decades, honeybees, other insects and birds have been disappearing. On the long term it is very worrying: biodiversity of ecosystems as well as the future of our agriculture are at stake. In fact without bees, more than 80% of the variety of the food we eat could disappear: the majority of fruits and vegetables would vanish from our tables. Mainly cereals would survive. But what is a breakfast without jam to put on our bread? What is a field without butterflies? What is a countryside without orchards?

A main reason for this problem is chemicals used in intensive agriculture and in particular neonicotinoids and phenylpyrazoles. 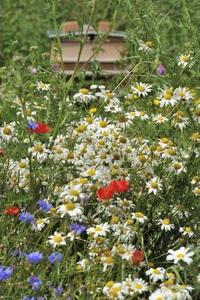 Imidacloprid, thiamethoxam, clothianidin, thiacloprid, acetamiprid and fipronil belong to these two classes of insecticides that have been at the base of dramatic honeybee colony losses for 20 years in Europe and worldwide. When imidacloprid was introduced in the French market in the early 90’s, French beekeepers immediately denounced abnormal honeybees mortality in areas of intensive culture of sunflower and then maize as well as oilseed rape. Since then the disappearance of honeybees spread across Europe and the world. The United States gave a name to one aspect of this disaster: the Colony Collapse Disorder.

Neonicotinoids and fipronil are the most toxic insecticides honeybees were ever confronted to in the history of industrial agriculture. Furthermore, for the first time, an insecticide is present in pollen and nectar. Therefore honeybees as well as other pollinators are thus directly ingesting the toxics.

This environmental and socio-economical scandal has lasted too long, that is why PAN Europe decided to launch a campaign to fight the use of neonicotinoids and fipronil insecticides. The relationship between bees and the environment, between beekeepers and farmers, between NGOs and pesticides industry have never been so complicated since neonicotinoids are on the market.

This website aims at explaining why neonicotinoids and fipronil are so harmful to bees as well as the entire ecosystems, how and why they were authorised in order to provide you with pertinent scientific articles on neonicotinoids, to show what PAN-Europe does to defend bees, let you know what is happening concerning neonicotinoids in Europe and give you tips on how to help bees...

Stay updated on PAN Europe's campaigns for pesticide free food and subscribe to our quarterly newsletter: